Claude Monet & Me.
post-impressionism /pəʊstɪmˈprɛʃ(ə)nɪz(ə)m/ ♫ noun [mass noun] the work or style of a varied group of late 19th-century and early 20th-century artists including Van Gogh, Gauguin, and Cézanne. They reacted against the naturalism of the impressionists to explore colour, line, and form, and the emotional response of the artist, a concern which led to the development of expressionism.     Long long ago I went through a period when I fancied myself as an up and coming artist. It only lasted as long as my first few attempts, when even I could recognize a lack of any exceptional talent.  However, one of my pictures was sufficiently passable for my wife to suggest that we have it smartly framed and hung in our home. I was doubtful but she had such confidence in me that I went along with the idea. There was a fine picture framer in our neighborhood and we had some pictures framed from time to time and we were always happy with their recommendations and their work. Cut a long story short,       Betty, the owner, looked at my picture and asked , "Did you say it was his first painting ?"
"Yes," said Irene, "Good, isn't it? That's why I'd like to get a really nice frame for it."
"It's quite good for a first attempt. I wouldn't recommend spending a lot of money framing it. You could buy a very nice frame for it in one of the 'Big Box Bric a brac stores for a few dollars, that would look quite nice hanging in the basement or in a den. Custom framing is really quite expensive and I don't think you need to spend a lot of money on this." Irene told me the story and ended up saying,    "Well, I still like it. It's better than a lot of the junk you see in many of the artsy stores."
Being the thrifty souls we are, we ended up following Betty's advice and I found a frame in a local hobby shop that fitted my picture perfectly. Instead of throwing my work of art out, Irene hung it in the den part of our basement and there it hung for many years.       Five Years later. my office or den in our basement. was a separate room squeezed between tyke playroom and the utility area of the basement.. the kids used to frequently play in the playroom and on this particular day, as I dashed down to the office to sign off various urgent papers,I see my daughter and her little friend, both about nine years old, standing looking at two paintings side by side on the wall. One was a nice little inexpensive print of a picture by the great impressionist artist Monet and beside it was my pathetic work that even Betty the Art Framer, could not bring herself to charge invest my money in! The two girls were pensively evaluating the works of art. Unobserved, I watched them. "Oh, I like that one best," said the little girl. "Yes, I like that one best too," said the other little girl, who happened to be my daughter, dismissing the Monet. I was thrilled!             Years later. It was that stage of life when we were gathering the desiderata of a lifetime and deciding what could be dumped and what sentimental garbage the kids (middle -aged now) might be interested in keeping. As we groped our way through the boxes of toys, kids books and pictures, we tended to reassign items from the 'dump' group back into the 'keep group'. "Hey! Look what I've found here," I yelled, pulling a painting out of a cardboard box. ' It's the painting that Betty the picture framer wouldn't waste MY money framing!. I think it's pretty good now - or perhaps it's that my vision isn't what it used to be. Still, I do recall Rena and her little friend preferring my picture to Monet's." [Monet, Claude /ˈmɒneɪ/ ♫ (1840–1926), French painter. A founder member of the impressionists, his fascination with the play of light on objects led him to produce series of paintings of single subjects painted at different times of the day and under different weather conditions, such as the Water-lilies sequence (1899–1906; 1916 onwards).] Now it so happened that my daughter and her husband had just bought a new condo and high on their list of imperatives was filling those lovely walls with appropriate artistic endeavours. "When she and Bill come to visit next we'll see if she still thinks I'm better than Monet." They came to visit a few weeks later. "We have some nice pictures that I think you and Bill will really like for your walls," Irene said. "They are stored in boxes in the basement. I'll call you when dinner is ready. " "Okay," said Rena, beginning her descent into the basement. Bill followed her down an we heard no more for a while. Shortly after, we heard quite a lot of noise coming from the basement as Bill and Rena made their way back up to the living room. 'Well, did you find anything that you'd like to hang on your walls?" Irene asked.
"Yes we did, several things," Rena said excitedly, "but this is what we both like best like of all". They both held out the favoured picture. Here it is:   A genuine Smith!  (I note that modesty prompted me to leave it unsigned.) 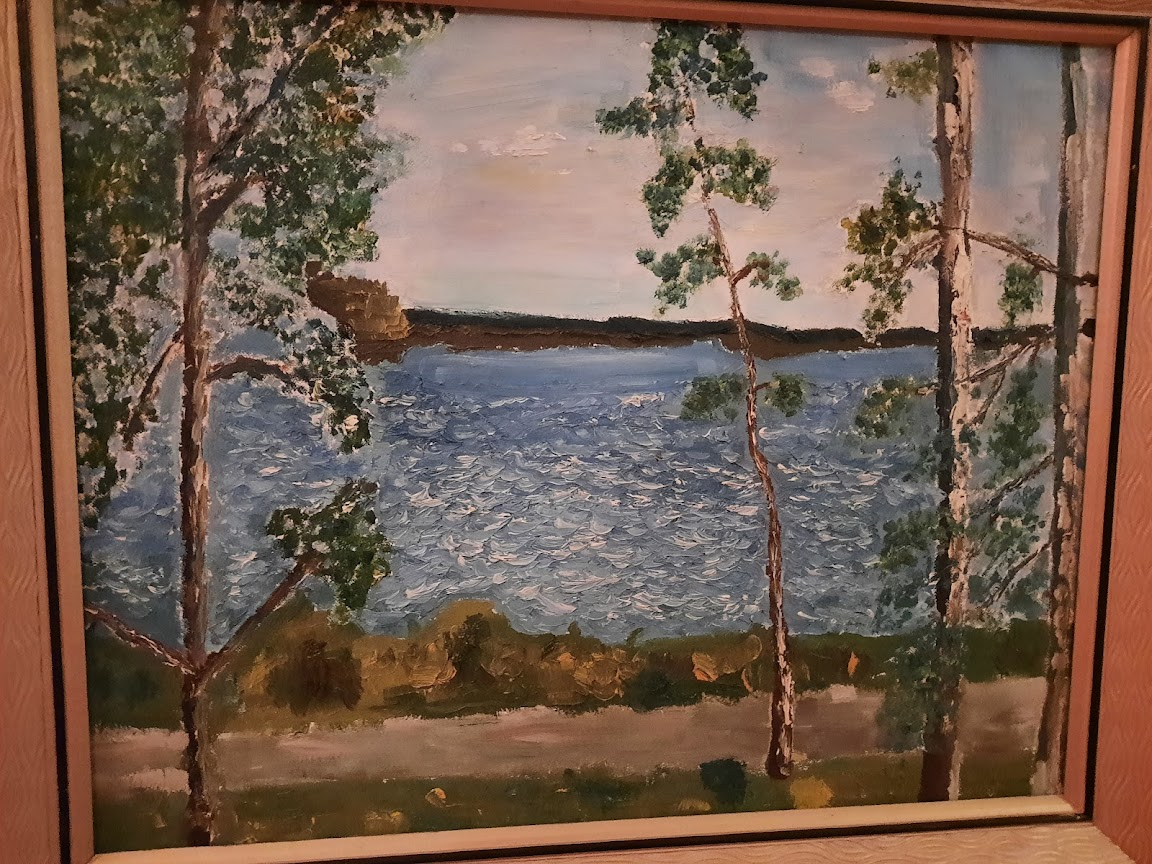 And still it hangs.  For their next birthday I'm going to have it professionally framed!
Someday I may paint another picture!! 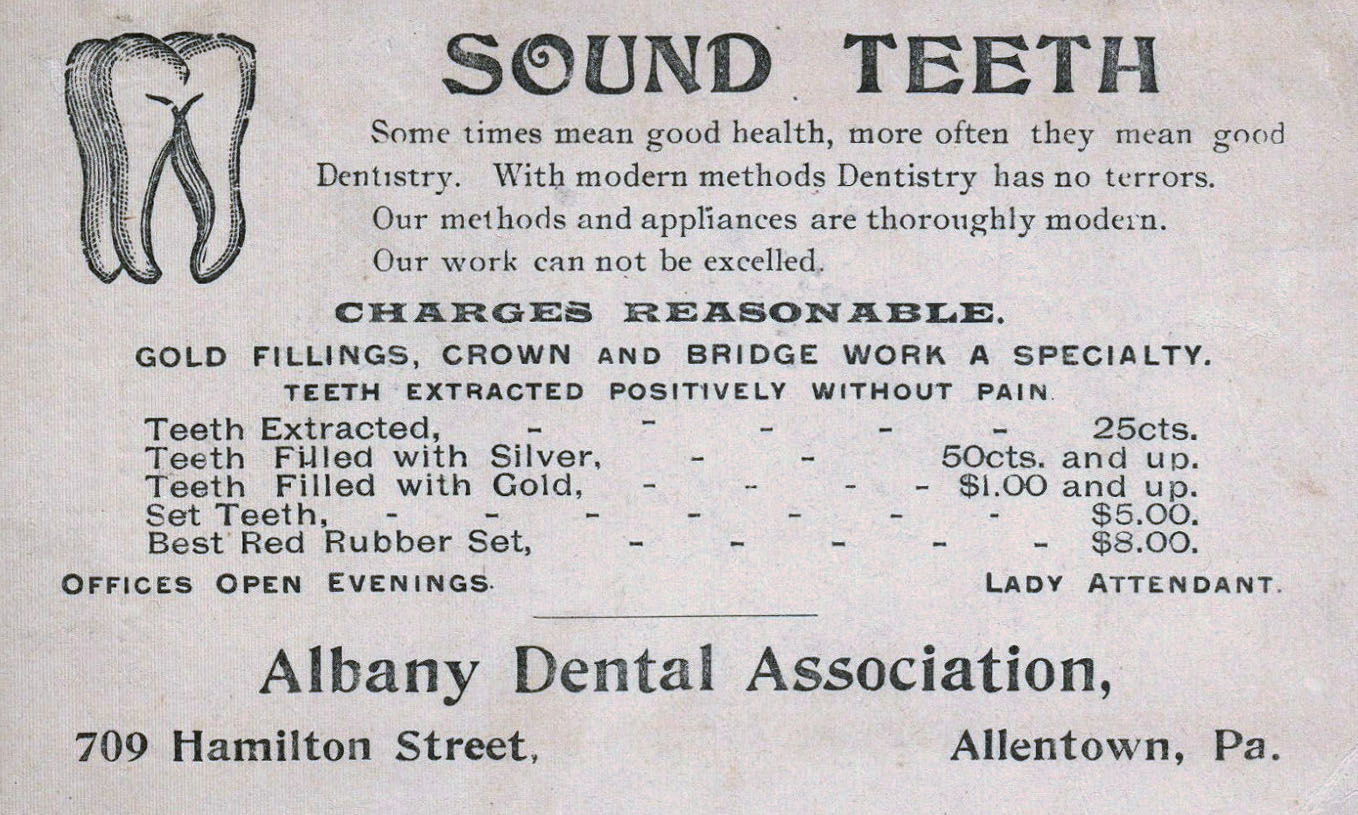 “His pole, with pewter basins hung,

Rang’d cups that in the window stood,

Did well his threefold trade explain,

-The Goat without a Beard, by John Gay.

Dental extractions were one of the commoner procedures of the barber surgeons or of a family member good with pliers, but in those pre-anesthetic days people often pulled out their own teeth using everything from a string tied around the tooth and the other end around the door handle. A good slug of gin, then slam the door and voila - the tooth is out.

The point of all of the above is that before I cut to the chase, I wanted you to know that in 1902 a dental extraction was 25c. Now let's carry on with the story!

My wife developed a toothache and a loose tooth recently. She went to her dentist. The dentist confirmed the loose tooth and decided it should be extracted. The dentist referred her to a specialist which mildly surprised me, since in my day, dental extraction was the bread and butter dental procedure. (see the published tariff above in 1902 the procedure cost twenty-five cents).

The appointment date rolled around pretty quickly and I drove my wife to the dental appointment. Initially, I thought the appointment was to have the tooth pulled. Perish that thought! The appointment was to have the tooth that was to be extracted assessed, the 'surgery' to be planned for a later date. We went into the waiting room, where my wife was given a five page medical history form to complete that I filled in for her. (The print was too small for her failing vision so I guess if I wasn't there they would have had to find someone to do it for her.) Apart from the basic medical history required, the document appeared to be put together mainly to indemnify the dentist in case anything went wrong.

The waiting area was comfortable enough and dominated by a large OLED television screen with one of the best pictures I have seen - at least that's what I think it was. A colorful collage of ocean creatures displayed their magnificently spectacular, spectral antics in a manner that suggested that even for fish and other sea creatures the virtual life superseded reality. A real tank could not host the drama as magnificently. It was obvious that this was going to be one expensive piece of dental surgery. I was enjoying the show when the assistant came to take my wife into the dentist. Since this was the tail-end of Covid (one visitor in the office at a time!) I waited outside, which I was more than happy to do as I had become engrossed in Oceanography.

"Everything okay?" I asked.

She nodded, "Oh yes, I'm going to have it out on Thursday. I hope you don't have an appointment for that time ?" she asked anxiously.

(Now that we are both octogenarians we have so many maintenance appointments from head to foot that we have to be careful that they don't conflict.)

"Did it hurt when he wiggled the tooth to see how loose it is?" I asked.

"No" she shook her head as we both struggled to get our seat belts done up.

"Well," I said impatiently, "What did he say when he looked in your mouth and probed it?"

"He didn't look in my mouth at all," she said, struggling to get the seat belt off."

My wife doesn't hear as well as she used to. I increased my normally loud vocal volume up a notch. "I asked what he said when he looked in your mouth," I shouted. She has the best teeth I've ever seen in a person of our age, and in sixty years this old General Practitioner spent a lot of time looking in mouths.

"He didn't ask you to open your mouth at all?" I asked

Now I know I am old, very old. So old in fact that way back in the days of CB radio, (remember that?) my moniker was "The Dinosaur"!

A week later we arrived at the dentist's office at 1.25pm, for our 1.45 appointment. I was relieved that the same oceanography program was still on.

The price had gone up considerably since the 1902 rates published at the top of this blog, but then so has everything else!

We've come a long way since the tooth fairy used to visit me!!